COTEC was established in 1986 to co-ordinate the views of the National Associations of Occupational Therapy of the then Member States of the European Communities. The European Council in Brussels agreed in 1983 that “mutual recognition for diplomas was an important step in creating satisfactory conditions for the exercise of a number of professions” including occupational therapists. The first official meeting of the Committee of European Occupational Therapists was held in 1986 Strasbourg on January 17th.

In 1995 the need to harmonise and develop OT in higher education resulted in the founding of ENOTHE: European Network of Occupational Therapy in Higher Education.

As time has moved on the boards of COTEC and ENOTHE discussed closer collaboration between both organisations to better address the social and health issues affecting the citizens of Europe, the challenges which the profession is facing and to increase the possibilities of influencing European Health and Social policy. From 2011 there have been many joint meetings, resulting in the creation of “Occupational Therapy Europe” in which education, practice and research will work more closely together.

One of the collaborative outcomes has been the decision to organise a joint COTEC ENOTHE congress every 4 years and the visual identity of COTEC, ENOTHE and OT-Europe was designed to express the collaboration. In addition there has been agreement to have joint projects and some joint meetings as appropriate. 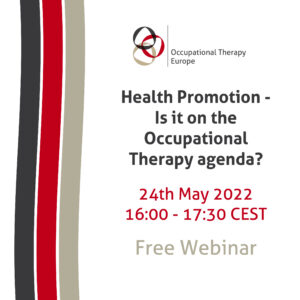